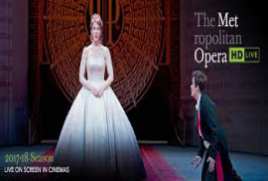 Fathom Events and The Met: Live in HD feature a Puccinis Tosca broadcast, which live in selected cinemas across the country on Saturday, January 27. The rivalry is the glory of the lifts and suits of Napoleon Franco Zeffirellis. Sir David McVicars is surprised by a new production. It offers a spectacular background for the amazing song. Sonya Yoncheva will first play her role as the title of the prima donna with Vittorio Grigolo and Bryn Terfel. Emmanuel Villaume is running.